As one humanitarian initiative from Lower-Saxony the “Luftbrücke Irak” (air bridge Iraq) shows the immense human commitment of the German citizens to support people in poverty and distress in war areas, to ease their suffering and give innocent children a new chance for a better life.
The initiative was founded after an urgent appeal from Iraq in late summer of 2007 in the City of Peace Osnabrueck.
It is about the aid for young victims of war. Organization of treatments of terror and war wounded children in German hospitals.
Mirza Dinnayi, former consultant of the Iraqi president Dschalal Talabani, didn’t want to keep standing and watching the horror after the devastating bombing of Sindschar with over 300 dead. At the beginning the initiative worked closely together with the “Verein zur Unterstützung hilfsbedürftiger Kinder” (Association for the Support of Children in Need” of Head Physician Dr. Heiner Ehrenbrink.

End of November 2008 the initiative founded their own association Luftbrücke Irak e.V..

50 victims of terror could already be flown out of Iraq to Germany, got treatment and finally were sent back to their parents until May 2016.
The medical situation in Iraq is so precarious since many doctors have left the country and due to a lack of infrastructure.
Many children had to hold out at home for years without being able to walk for years.
The association specialized in medically complicated cases, which cannot be treated in Iraq. Without an operation the children often run the risk of a lifelong disability.
By now there are numerous bureaucratic barriers to overcome for every case in order to pave the way for an operation for the children.
We are very grateful for the support of the host families. The host families often help without demanding a single cent.
Costs of about 100 Euro per day and bed arise for the stationary stay. Special operations are being paid from the donated money.
In some cases, there additionally are travel and catering cost. All donations are being spend to 100 percent for the recovery process of the patients.

With every action new hopes are being built for ill and injured children and their families. 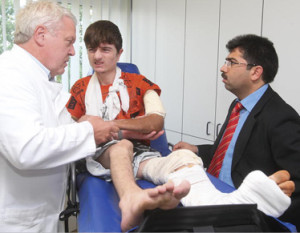